So let's get started with this sonic fist fight. Thieving Coyote feel and sound like Weedeater took Planet of Zeus on a drug fueled coitus binder across the state of South Carolina and a while later we have the nearly maniacally crafted Thieving Coyote S/T EP in 2014. Now that you've been properly introduced, lets get down to brass tacks.

I'm very excited to review this release, not because it's new or in all honesty incredibly different, but because of the substance on the record. The arrangement and drive of the tunes not only satisfies the 'stoner rock' jones but, in my mind anyway, leaves me asking myself what these guys will be capable of in the future. In my opinion Thieving Coyote have made it clear that they have grasped the vision they're after, an extra crispy bucket of deep fried rock and roll.

For the band nerds I have the following observations, growling guitars, singing tones, classic key and progression selections, preaching lyrical styling, toe tapping and head nodding swing in the rhythm section. If these are some key notes you search for in your listening this is the album for you. Also the hooker on the cb as the intro to the track 'lizards on the radio' is a classic move, along with the acoustic outtro.

Even though I haven't had a chance to catch a live set, fingers crossed for the future, I've run across some live stuff on youtube and can say it appears these guys bring the ruckus along.

Unless you're one of the lucky few that have grabbed a self released copy of this five pointed monster you'll need to direct your interweb browser to the bands bandcamp to check out the tunes, however, physical copies are on the way via the Snake Charmer Coalition label so certainly stay tuned.

Posted by Mr McMayhem at 1:40 PM No comments:

So I was introduced to Skunk via my buddy who if i recall correctly painted them as 'totally bon scott worship', which was correct. However I cannot take anything away from the Oakland Ca. based group. They are making their own way with their 2015 ep release which is a solid, well rounded doom/stoner/rock n fuckin-roll pile driver.

Its especially interesting to listen to the crafting of the lyrical choices, 'never been to the dark side of the moon, never smoked atop a giant magic shroom', if this gets your pickle a twitchin then check them out. The guitar tones are also quite 'classic' in nature, you can expect some of the typical guitar parlor tricks but all the while those amps are growling like a pack of wild dogs. If these gents come close i'd certainly check them out. So if you live close to them and get the chance you should certainly get to a show and pick up some merch so these guys can make another record. 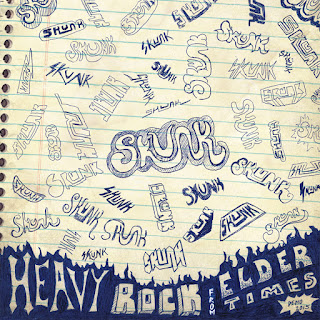 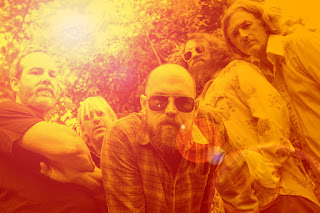