I had listened to this a while ago and hadn't really gotten around to writing about it. I wont make claims that 'I knew about these guys way back man.' however, I almost would rather review this album as opposed to the two that have been released since the 2010 release of this particular slab.

There's a documentary that talks about this sort of music and Mark Arm of Mudhoney said it best, sometimes being over technical especially in rock and roll can just spoil the entire thing. I'm paraphrasing of course, you want notation and proper sighting you can go the fuck back to school, this is a respectable low brow organization here. PS that doc is here, and is one of my favs.

So I'm listening to this album again as a write the review here and its yet another album that really relates the execution and really the feeling of playing this sort of music. As musicians this three piece have built, with this record anyway because I haven't really delved into the others, an expression of the true intent of their medium. If you like Eternal Elysium and other sort of psychedelic, sort of rock and roll, sort of doomy, these guys are for you. I wont lie though, these guys firmly understand how to make a heavy psych/blues record, I don't think this was groping in the dark. This record offers much in the way of a methodically constructed sonic space trip.

As far as quality of the record is considered youd be hard pressed to find much you dont like about this. The guitar tones sing, the typical but required effects are just so, but in the back ground you'll hear a fuckin sitar, crazy/nice, this album is a labor of artists. It may annoy some, it may have parts where I'm like well maybe I'm just not in the proper state of mind to listen to this jam right now, but i tell ya man, I'm diggin it.

Check this album out if you're in a loud psych sort of mood, or are feeling Earthless. 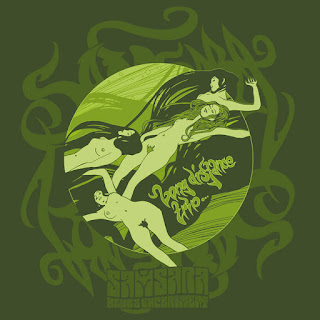 Posted by Mr McMayhem at 1:18 PM No comments:

Weedruid ~ Into the Acid Swamp

I'm really digging this album, between the growling, growling not obnoxiously distorted, guitars and the perfectly logical flight of this album you merely need to turn it on to experience a complete thought from the collective consciousness of a modern underground doom rock band.

I myself enjoy how relatable this record is in the sense that the keys and progressions make sense. The meandering tour this slab will take you on had in my opinion the perfect amount of doom, typically the tempo falls out of modern 'doom' and it becomes very boring. As I said the crafting of this album is I think more impressive than the actual material, the lack of vocals makes for a riff showcase that is more groove based, none of the deedly deedly bullshits here.

I can't say much more than brilliant execution, it has the heart of Sleep with the sensibilities of a voxless Mars Red Sky, it's heavy as shit but at some points seems as finely crafted as a crystal pot leaf statuete in Satan's curio cabinet.

Check these guys out, enjoy. 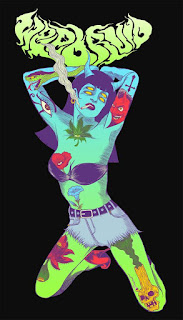 Posted by Mr McMayhem at 8:20 PM No comments: